In a highly candid and personal account, the father of LSD details the history of his “problem child” and his long and fruitful career as a research chemist. An essential read for anyone wanting to learn about how LSD originated and Hofmann’s view on its transition to recreational use. 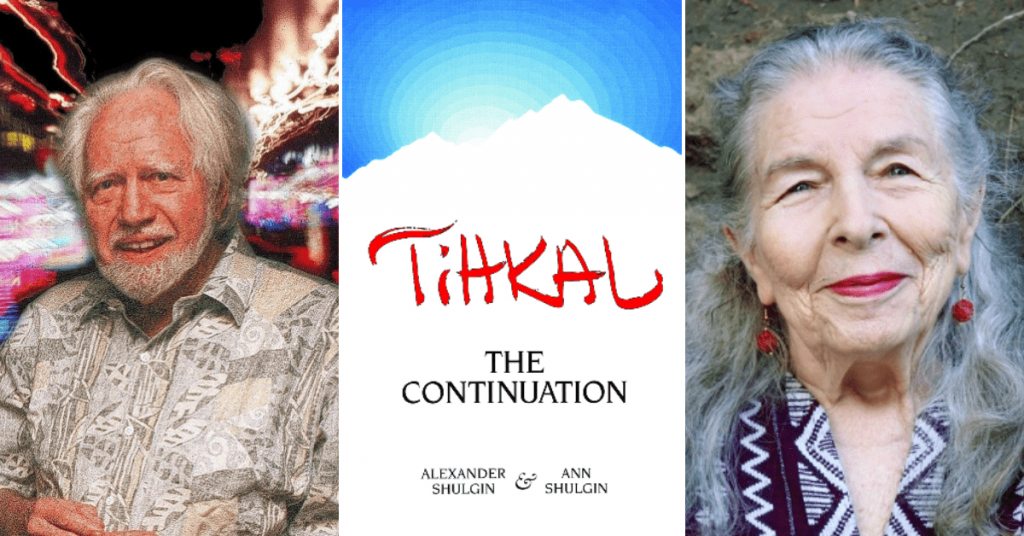 In a sequel to PiHKAL, the first part continues the story of the Shulgins’ relationship and the second part provided synthesis information about tryptamines. Shulgin has made the second part freely available on Erowid.org. 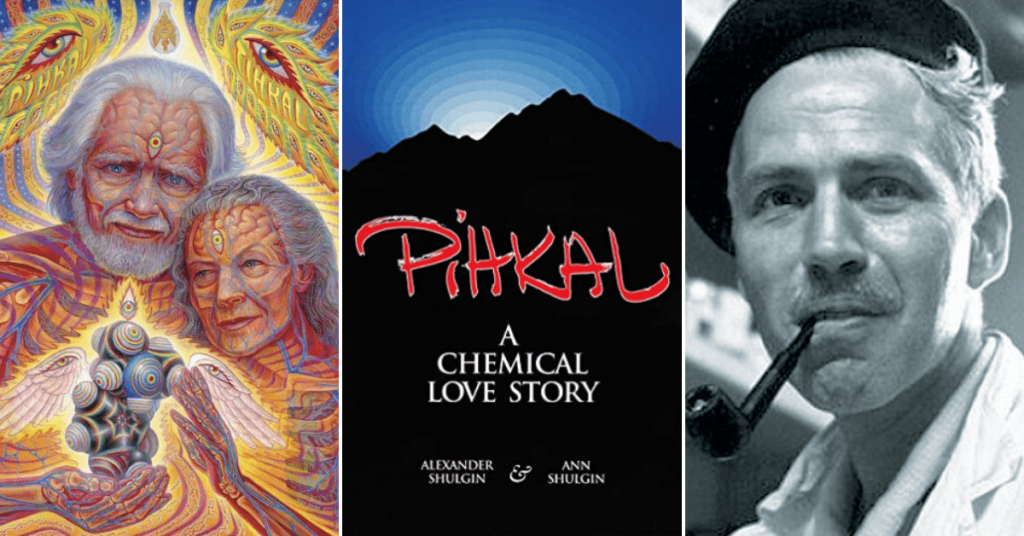 One part fictionalized autobiography of the Shulgin’s relationship and one part chemistry cookbook for a variety of phenethylamines. This book is not easy to get your hands on and while it is considered a classic text, the second part of the part will not be easily accessible to those without knowledge of chemistry. The Shulgin’s were motivated to make the synthesis information of these compounds readily available to protect public access to this information.

Classic psychedelics produce altered states of consciousness that individuals often interpret as meaningful experiences. Across a number of human studies, when the participant-rated intensity of the overall drug effects are statistically controlled for, certain subjective effects predict therapeutic and other desirable outcomes. Underlying neurobiological mechanisms are likely necessary but not sufficient to confer full and enduring beneficial effects. We propose that the subjective effects of psychedelics are necessary for their enduring beneficial effects and that these subjective effects account for the majority of their benefit.

Background and aims: Ibogaine is an indole alkaloid used in rituals of the African Bwiti tribe. It is also used in non-medical settings to treat addiction. However, ibogaine has been linked to several deaths, mainly due to cardiac events called torsades des pointes preceded by QTc prolongation as well as other safety concerns. This study aimed to evaluate the cardiac, cerebellar and psychomimetic safety of ibogaine in patients with opioid use disorder.

Setting: Department of psychiatry in a university medical center, the Netherlands.

Participants: Patients with opioid use disorder (n = 14) on opioid maintenance treatment with a lasting wish for abstinence, who failed to reach abstinence with standard care.

Intervention and measurements: After conversion to morphine-sulphate, a single dose of ibogaine-HCl 10 mg/kg was administered and patients were monitored at regular intervals for at least 24 hours assessing QTc, blood pressure and heart rate, scale for the assessment and rating of ataxia (SARA) to assess cerebellar side effects and the delirium observation scale (DOS) to assess psychomimetic effects.

Findings: The maximum QTc (Fridericia) prolongation was on average 95ms (range 29-146ms). Fifty percent of subjects reached a QTc of over 500ms during the observation period. In six out 14 subjects prolongation above 450ms lasted beyond 24 hours after ingestion of ibogaine. No torsades des pointes were observed. Severe transient ataxia with inability to walk without support was seen in all patients. Withdrawal and psychomimetic effects were mostly well-tolerated and manageable (11/14 did not return to morphine within 24 hours, DOS scores remained below threshold).

Conclusions: This open-label observational study found that ibogaine treatment of patients with opioid use disorder can induce a clinically relevant but reversible QTc prolongation, bradycardia, and severe ataxia.

Methods: Resting-state functional magnetic resonance imaging was conducted in 35 patients with MDD at baseline and 24 hours following treatment with i.v. ketamine. A seed-to-voxel functional connectivity (FC) analysis was performed with the Hb as a seed-of-interest. Pre-post changes in FC and the associations between changes in FC of the Hb and depressive symptom severity were examined.

Conclusions: These preliminary results suggest that the Hb might be involved in ketamine’s antidepressant action in patients with MDD, although these findings are limited by the lack of a control group.

Depression is a widespread and devastating mental illness and the search for rapid-acting antidepressants remains critical. There is now exciting evidence that the psychedelic compound psilocybin produces not only powerful alterations of consciousness, but also rapid and persistent antidepressant effects. How psilocybin exerts its therapeutic actions is not known, but it is widely presumed that these actions require altered consciousness, which is known to be dependent on serotonin 2A receptor (5-HT2AR) activation. This hypothesis has never been tested, however. We therefore asked whether psilocybin would exert antidepressant-like responses in mice and, if so, whether these responses required 5-HT2AR activation. Using chronically stressed male mice, we observed that a single injection of psilocybin reversed anhedonic responses assessed with the sucrose preference and female urine preference tests. The antianhedonic response to psilocybin was accompanied by a strengthening of excitatory synapses in the hippocampus-a characteristic of traditional and fast-acting antidepressants. Neither behavioral nor electrophysiological responses to psilocybin were prevented by pretreatment with the 5-HT2A/2C antagonist ketanserin, despite positive evidence of ketanserin’s efficacy. We conclude that psilocybin’s mechanism of antidepressant action can be studied in animal models and suggest that altered perception may not be required for its antidepressant effects. We further suggest that a 5-HT2AR-independent restoration of synaptic strength in cortico-mesolimbic reward circuits may contribute to its antidepressant action. The possibility of combining psychedelic compounds and a 5-HT2AR antagonist offers a potential means to increase their acceptance and clinical utility and should be studied in human depression.

Creativity is an essential cognitive ability linked to all areas of our everyday functioning. Thus, finding a way to enhance it is of broad interest. A large number of anecdotal reports suggest that the consumption of psychedelic drugs can enhance creative thinking; however, scientific evidence is lacking. Following a double-blind, placebo-controlled, parallel-group design, we demonstrated that psilocybin (0.17 mg/kg) induced a time- and construct-related differentiation of effects on creative thinking. Acutely, psilocybin increased ratings of (spontaneous) creative insights, while decreasing (deliberate) task-based creativity. Seven days after psilocybin, number of novel ideas increased. Furthermore, we utilized an ultrahigh field multimodal brain imaging approach, and found that acute and persisting effects were predicted by within- and between-network connectivity of the default mode network. Findings add some support to historical claims that psychedelics can influence aspects of the creative process, potentially indicating them as a tool to investigate creativity and subsequent underlying neural mechanisms. Trial NL6007; psilocybin as a tool for enhanced cognitive flexibility; https://www.trialregister.nl/trial/6007 .

Background: 3,4-methylenedioxymethamphetamine (MDMA, “ecstasy”) is used both recreationally and therapeutically. Little is known about the factors influencing inter- and intra-individual differences in the acute response to MDMA. Effects of other psychoactive substances have been shown to be critically influenced by personality traits and mood state before intake.

Methods: We pooled data from 10 randomized, double-blind, placebo-controlled, cross-over studies performed in the same laboratory in 194 healthy subjects receiving doses of 75 or 125mg of MDMA. We investigated the influence of drug dose, body weight, sex, age, drug pre-experience, genetics, personality and mental state before drug intake on the acute physiological and psychological response to MDMA.

Results: In univariable analyses, the MDMA plasma concentration was the strongest predictor for most outcome variables. When adjusting for dose per body weight, we found that (a) a higher activity of the enzyme CYP2D6 predicted lower MDMA plasma concentration, (b) a higher score in the personality trait “openness to experience” predicted more perceived “closeness”, a stronger decrease in “general inactivation”, and higher scores in the 5D-ASC (5 Dimensions of Altered States of Consciousness Questionnaire) scales “oceanic boundlessness” and “visionary restructuralization”, and (c) subjects with high “neuroticism” or trait anxiety were more likely to have unpleasant and/or anxious reactions.

Objectives: Accumulating evidence has implicated that brain derived neurotrophic factor (BDNF) is thought to be involved in the pathophysiology of depression, but its correlation with ketamine’s antidepressant efficacy focusing on Chinese individuals with depression is not known. This study was aim to determine the correlation of plasma BDNF (pBDNF) concentrations and ketamine’s antidepressant efficacy.

Methods: Ninety-four individuals with depression received six intravenous infusions ketamine (0.5 mg/kg). Remission and response were defined as Montgomery-Asberg Depression Rating Scale (MADRS) scores less than 10 and a reduction of 50% or more in MADRS scores, respectively. Plasma was collected at baseline and at 24 h and 2 weeks after completing six ketamine infusions (baseline, 13 d and 26 d).

Conclusion: This preliminary study suggests that baseline pBDNF concentrations appeared to be correlated with ketamine’s antidepressant efficacy in Chinese patients with depression.