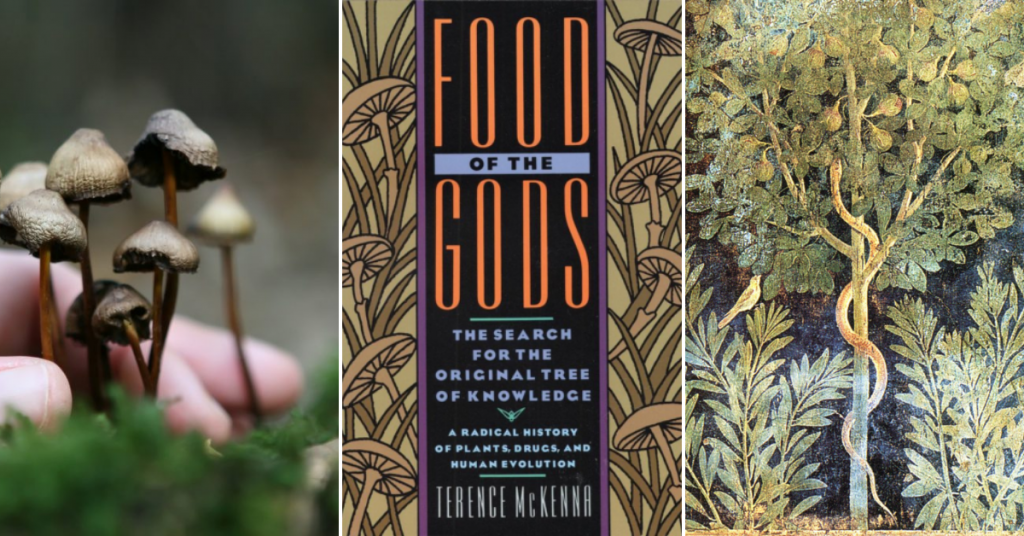 Renowned ethnobotanist and psychonaut Terence McKenna explores our ancient relationship with organic psychedelics and opens a doorway to a higher state of being for us all. This book will be particularly interesting to those interesting in consciousness. 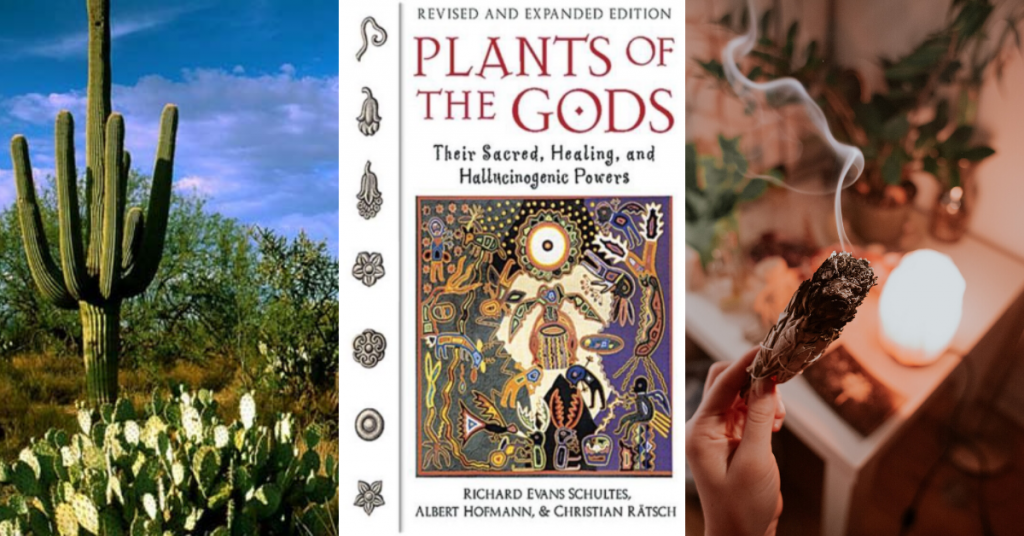 Ritual uses of psychoactive plants; detail the uses of hallucinogens in sacred shamanic rites while providing lucid explanations of the biochemistry of these plants and the cultural prayers, songs, and dances associated with them 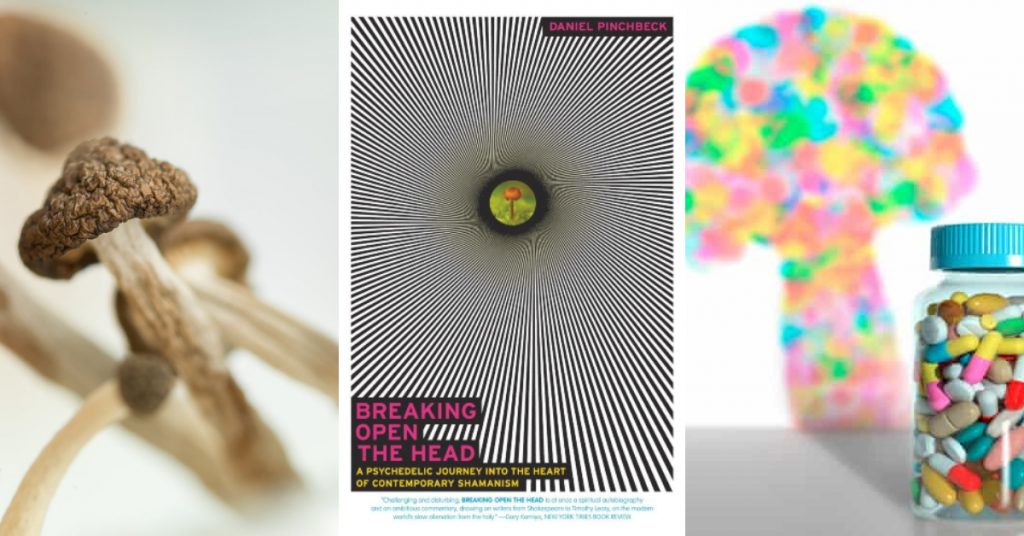 Daniel Pinchbeck tells the story of the encounters between the modern consciousness of the West and psychedelic substances, including thinkers like Allen Ginsberg, Antonin Artaud, Walter Benjamin, and Terence McKenna, and the new wave present-day ethnobotanists, chemists, psychonauts and philosophers. 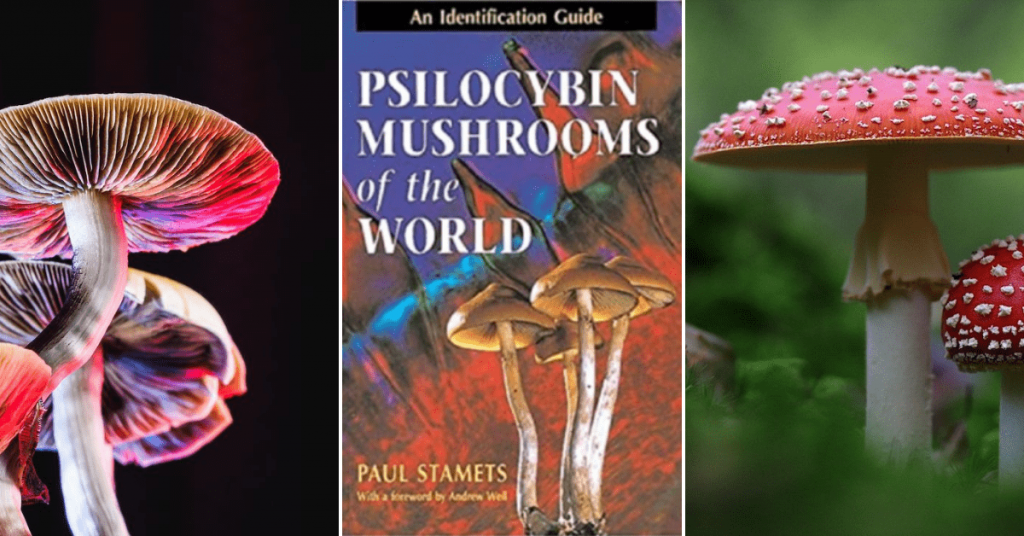 Detailed descriptions and color photographs for over 100 psilocybin-containing mushroom species are provided, as well as an exploration of their long-standing (and often religious) use by ancient peoples and their continued significance to modern-day culture.

Psilocybin (4-phosphoryloxy-N,N-dimethyltryptamine) is an indole-based secondary metabolite produced by numerous species of mushrooms. South American Aztec Indians referred to them as teonanacatl, meaning “god’s flesh,” and they were used in religious and healing rituals. Spanish missionaries in the 1500s attempted to destroy all records and evidence of the use of these mushrooms. Nevertheless, a 16th century Spanish Franciscan friar and historian mentioned teonanacatl in his extensive writings, intriguing 20th century ethnopharmacologists and leading to a decades-long search for the identity of teonanacatl. Their search ultimately led to a 1957 photo-essay in a popular magazine, describing for the Western world the use of these mushrooms. Specimens were ultimately obtained, and their active principle identified and chemically synthesized. In the past 10–15 years several FDA-approved clinical studies have indicated potential medical value for psilocybin-assisted psychotherapy in treating depression, anxiety, and certain addictions. At present, assuming that the early clinical studies can be validated by larger studies, psilocybin is poised to make a significant impact on treatments available to psychiatric medicine.

Salvia divinorum is a herbal plant native to the southwest region of Mexico. Traditional preparations of this plant have been used in illness treatments that converge with inflammatory conditions and pain. Currently, S. divinorum extracts have become popular in several countries as a recreational drug due to its hallucinogenic effects. Its main active component is a diterpene named salvinorin A (SA), a potent naturally occurring hallucinogen with a great affinity to the κ opioid receptors and with allosteric modulation of cannabinoid type 1 receptors. Recent biochemical research has revealed the mechanism of action of the anti-inflammatory and analgesic effect of SA at the cellular and molecular level. Nevertheless, because of their short-lasting and hallucinogenic effect, the research has focused on discovering a new analogue of SA that is able to induce analgesia and reduce inflammation with a long-lasting effect but without the hallucinatory component. In this review, we explore the role of S. divinorum, SA and its analogues. We focus mainly on their analgesic and anti-inflammatory roles but also mention their psychoactive properties.

Ibogaine and other ibogan type alkaloids present anti-addictive effects against several drugs of abuse and occur in different species of the Apocynaceae family. In this work, we used gas chromatography-mass spectrometry (GC/MS) and principal component analysis (PCA) in order to compare the alkaloid profiles of the root and stem barks of four Mexican Tabernaemontana species with the root bark of the entheogenic African shrub Tabernanthe iboga. PCA demonstrated that separation between species could be attributed to quantitative differences of the major alkaloids, coronaridine, ibogamine, voacangine, and ibogaine. While T. iboga mainly presented high concentrations of ibogaine, Tabernaemontana samples either showed a predominance of voacangine and ibogaine, or coronaridine and ibogamine, respectively. The results illustrate the phytochemical proximity between both genera and confirm previous suggestions that Mexican Tabernaemontana species are viable sources of anti-addictive compounds.

Psilocybe mushrooms are best known for their l-tryptophan-derived psychotropic alkaloid psilocybin. Dimethylation of norbaeocystin, the precursor of psilocybin, by the enzyme PsiM is a critical step during the biosynthesis of psilocybin. However, the “magic” mushroom Psilocybe serbica also mono- and dimethylates l-tryptophan, which is incompatible with the specificity of PsiM. Here, a second methyltransferase, TrpM, was identified and functionally characterized. Mono- and dimethylation activity on l-tryptophan was reconstituted in vitro, whereas tryptamine was rejected as a substrate. Therefore, we describe a second l-tryptophan-dependent pathway in Psilocybe that is not part of the biosynthesis of psilocybin. TrpM is unrelated to PsiM but originates from a retained ancient duplication event of a portion of the egtDB gene that encodes an ergothioneine biosynthesis enzyme. During mushroom evolution, this duplicated gene was widely lost but re-evolved sporadically and independently in various genera. We propose a new secondary metabolism evolvability mechanism, in which weakly selected genes are retained through preservation in a widely distributed, conserved pathway.

The fungal genus Psilocybe and other genera comprise numerous mushroom species that biosynthesize psilocybin (4-phosphoryloxy-N,N-dimethyltryptamine). It represents the prodrug to its dephosphorylated psychotropic analogue, psilocin. The colloquial term “magic mushrooms” for these fungi alludes to their hallucinogenic effects and to their use as recreational drugs. However, clinical trials have recognized psilocybin as a valuable candidate to be developed into a medication against depression and anxiety. We here highlight its recently elucidated biosynthesis, the concurrently developed concept of enzymatic in vitro and heterologous in vivo production, along with previous synthetic routes. The prospect of psilocybin as a promising therapeutic may entail an increased demand, which can be met by biotechnological production. Therefore, we also briefly touch on psilocybin’s therapeutic relevance and pharmacology.

Archeological studies in the United States, Mexico, and Peru suggest that mescaline, as a cactus constituent, has been used for more than 6000 years. Although it is a widespread cactus alkaloid, it is present in high concentrations in few species, notably the North American peyote ( Lophophora williamsii) and the South American wachuma ( Trichocereus pachanoi, T. peruvianus, and T. bridgesii). Spanish 16th century chroniclers considered these cacti “diabolic”, leading to their prohibition, but their use persisted to our days and has been spreading for the last 150 years. In the late 1800s, peyote attracted scientific attention; mescaline was isolated, and its role in the psychedelic effects of peyote tops or “mescal buttons” was demonstrated. Its structure was established by synthesis in 1929, and alternative routes were developed, providing larger amounts for pharmacological and biosynthetic research. Although its effects are attributed mainly to its action as a 5-HT2Aserotonin receptor agonist, mescaline binds in a similar concentration range to 5-HT1A and α2A receptors. It is largely excreted unchanged in human urine, and its metabolic products are apparently unrelated to its psychedelic properties. Its low potency is probably responsible for its relative neglect by recreational substance users, as the successful search for structure-activity relationships in the hallucinogen field focused largely on finding more potent analogues. Renewed interest in the possible therapeutic applications of psychedelic drugs may hopefully lead to novel insights regarding the commonalities and differences between the actions of individual classic hallucinogens.
Cassels, B., & Sáez-Briones, P. (2018). Dark Classics in Chemical Neuroscience: Mescaline. ACS chemical neuroscience. 10.1021/acschemneuro.8b00215
Link to full text