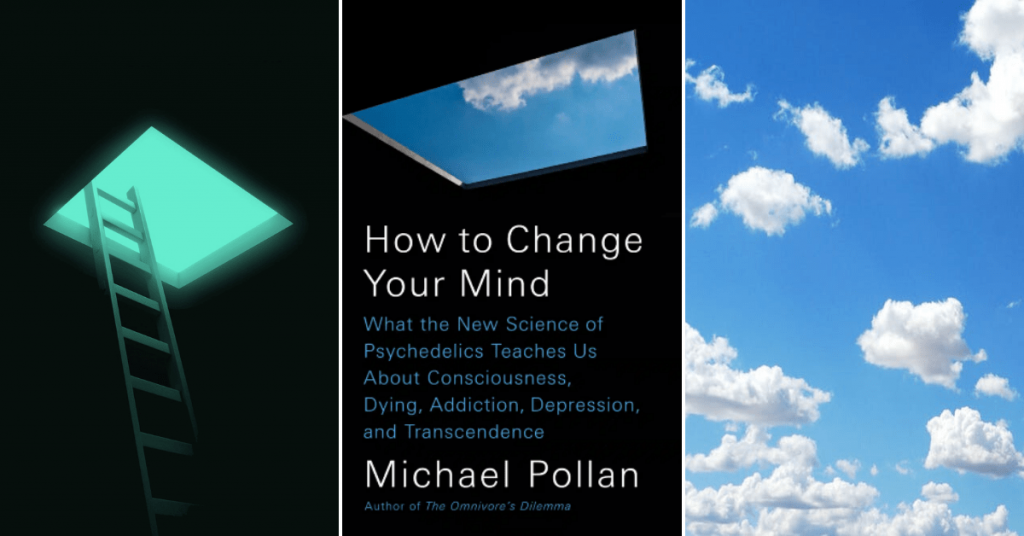 A highly accessible and enjoyable read through the history of psychedelic research and use starting in the 1960s up to the present day. Pollan applies his quintessential experiential journalism approach to various psychedelic substances – starting off hesitantly, as he weaves through the research and has several personal experiences, Pollan becomes a measured advocate for the power psychedelics have to change our minds and more.

People with advanced cancer are at heightened risk of desire for hastened death (DHD), suicidal ideation (SI), and completed suicide. Loss of Meaning (LoM), a component of demoralization, can be elevated by a cancer diagnosis and predicts DHD and SI in this population. We completed a randomized controlled trial in which psilocybin-assisted psychotherapy (PAP) produced rapid and sustained improvements in depression, demoralization, and hopelessness in people with cancer. Converging epidemiologic and clinical trial findings suggests a potential antisuicidal effect of this treatment. To probe our hypothesis that PAP relieves SI through its beneficial impacts on depression and demoralization (LoM in particular), we performed secondary analyses assessing within- and between-group differences with regard to LoM and an SI composite score. Among participants with elevated SI at baseline, PAP was associated with within-group reductions in SI that were apparent as early as 8 h and persisted for 6.5 months postdosing. PAP also produced large reductions in LoM from baseline that were apparent 2 weeks after treatment and remained significant and robust at the 6.5 month and 3.2 and 4.5 year follow-ups. Exploratory analyses support our hypothesis and suggest that PAP may be an effective antisuicidal intervention following a cancer diagnosis due to its positive impact on hopelessness and demoralization and its effects on meaning-making in particular. These preliminary results implicate psilocybin treatment as a potentially effective alternative to existing antidepressant medications in patients with cancer that are also suicidal, and warrant further investigation in participants with elevated levels of depression and suicidality.

Background: The use of psychedelic treatments has shown very promising results in some psychiatric and addictive disorders, but not all patients achieved a response.

Aim: The aim of this review is to explore the clinical and biological factors which could predict the response to psychedelics in psychiatric and addictive disorders.

Methods: A systematic research was performed on MEDLINE, PsycInfo, Web of science, and Scopus databases from January 1990 to May 2020. All studies investigating the predictive factors of response to psychedelics regardless of psychiatric or addictive disorders, were included.

Results: Twenty studies investigating addictive disorder, treatment-resistant depression, obsessive-compulsive disorder and depressive and anxiety symptoms in patients with life-threatening cancer were included in this review. We found that, in all indications, the main predictive factor of response to psychedelics is the intensity of the acute psychedelic experience. Indeed, we found this factor for alcohol and tobacco use disorders, treatment-resistant depression, and anxiety and depressive symptoms in patients with life-threatening cancer, but not for obsessive-compulsive disorder.

Conclusion: The intensity of the acute psychedelic experience was the main predicting factor of response. The action mechanism of this experience was not clear, but some hypotheses could be made, such as a modulation of serotoninergic system by 5-HT2A receptors agonism, a modulation of the default mode network (DMN) with an acute modular disintegration of the DMN followed by a re-integration of this network with a normal functioning, or an anti-inflammatory effect of this treatment.

Objective: To conduct a systematic review of modern-era (post-millennium) clinical studies assessing the therapeutic effects of serotonergic psychedelics drugs for mental health conditions. Although the main focus was on efficacy and safety, study characteristics, duration of antidepressants effects across studies, and the role of the subjective drug experiences were also reviewed and presented.

Method: A systematic literature search (1 Jan 2000 to 1 May 2020) was conducted in PubMed and PsychINFO for studies of patients undergoing treatment with a serotonergic psychedelic.

Results: Data from 16 papers, representing 10 independent psychedelic-assisted therapy trials (psilocybin = 7, ayahuasca = 2, LSD = 1), were extracted, presented in figures and tables, and narratively synthesized and discussed. Across these studies, a total of 188 patients suffering either cancer- or illness-related anxiety and depression disorders (C/I-RADD), major depressive disorder (MDD), obsessive-compulsive disorder (OCD) or substance use disorder (SUD) were included. The reviewed studies established feasibility and evidence of safety, alongside promising early data of efficacy in the treatment of depression, anxiety, OCD, and tobacco and alcohol use disorders. For a majority of patients, the therapeutic effects appeared to be long-lasting (weeks-months) after only 1 to 3 treatment session(s). All studies were conducted in line with guidelines for the safe conduct of psychedelic therapy, and no severe adverse events were reported.

Conclusion: The resurrection of clinical psychedelic research provides early evidence for treatment efficacy and safety for a range of psychiatric conditions, and constitutes an exciting new treatment avenue in a health area with major unmet needs.

The success of modern medicine creates a growing population of those suffering from life-threatening illnesses (LTI) who often experience anxiety, depression, and existential distress. We present a novel approach; investigating MDMA-assisted psychotherapy for the treatment of anxiety in people with an LTI. Participants with anxiety from an LTI were randomized in a double-blind study to receive MDMA (125 mg, n = 13) or placebo (n = 5) in combination with two 8-h psychotherapy sessions. The primary outcome was change in State-Trait Anxiety Inventory (STAI) Trait scores from baseline to one month post the second experimental session. After unblinding, participants in the MDMA group had one open-label MDMA session and placebo participants crossed over to receive three open-label MDMA sessions. Additional follow-up assessments occurred six and twelve months after a participant’s last experimental session. At the primary endpoint, the MDMA group had a greater mean (SD) reduction in STAI-Trait scores, – 23.5 (13.2), indicating less anxiety, compared to placebo group, – 8.8 (14.7); results did not reach a significant group difference (p = .056). Hedges’ g between-group effect size was 1.03 (95% CI: – 5.25, 7.31). Overall, MDMA was well-tolerated in this sample. These preliminary findings can inform development of larger clinical trials to further examine MDMA-assisted psychotherapy as a novel approach to treat individuals with LTI-related anxiety.Trial Registration: clinicaltrials.gov Identifier: NCT02427568, first registered April 28, 2015.

Earlier, we reported on the first study with LSD in human subjects in more than forty years, conducted in Switzerland by Peter Gasser and his team. A follow-up of this study [1], based on qualitative interviews with participants, indicates lasting positive outcomes.

The original double-blind, placebo-controlled study was carried out on a sample of twelve subjects, nine of which went on to complete the full course of the study, including the 12-month follow-up. The participants, all terminally ill, underwent 6-8 non-drug psychotherapeutic sessions and two LSD experiences conducted by a co-therapist dyad. The four subjects who initially received the active placebo of 20µg of LSD were offered the possibility to take two full experimental 200µg-doses of LSD at the end of the actual study, an opportunity that was taken by three of them, who were subsequently included in the qualitative interviews.

All subjects had previously displayed significant anxiety and/or depression related to their life-threatening health situation. All of them reported considerable long-term benefits, among which are reduced anxiety, less fear of death, and an improved quality of life. Interestingly, most of them also reported positive changes in personality, which could be a subjective confirmation of the quantitative measures of trait anxiety (as opposed to state anxiety) that were reported. These trait measures dropped significantly after the LSD sessions, and remained low at the 12-month follow-up [2].

In subjective reports of the LSD sessions, participants described facilitated access to emotions and catharsis. Facing a short life prognosis, they reported that LSD intensified and allowed expression of associated emotions. The interviews suggest the patients benefited from this intensified emotional experience. LSD also enabled them to view themselves and their difficult situation in a new, broader perspective. “Dying is as usual or unusual as life itself,” said one patient. “I simply have to familiarize myself with the idea and the process.” The patients also reported drastic shifts in emotions during or between the two sessions, usually beginning with ‘negative’ feelings related to their life situation, such as anxiety, depression and hopelessness. This reportedly negative emotional state transformed into a positive one, felt with an intensity never experienced before and lasting for at least one year after the sessions. Although they were facing ongoing severe somatic diseases, none of the participants reported any adverse effects from the psychedelic sessions.

Another interesting aspect is the approach that was chosen. Two different approaches emerged from the early research with LSD between the 1950s and the 1970s. In psycholytic therapy, used mainly in Europe, patients underwent a high number of psychoanalytically oriented psychotherapeutic sessions with low to medium dosages of LSD (50-100 µg). The psychedelic approach, on the other hand, aimed to elicit mystical or peak experiences in patients by administering them high doses (200-500 µg) in a limited number of sessions. This latter method was more frequently used in the United States, and up to now, it is the only approach that was used in the treatment of end-of-life anxiety.

In the Swiss study, the approach was very much akin to the psychedelic method, however staying on the low side of the dosage range. The setting was also somewhat looser than in the traditional psychedelic approach, where the subject kept on eyeshades most of the time while listening to music through headphones. Most of the resulting experiences could be described as ‘peak experiences’, but do not match the criteria for full mystical experiences. These two types of experiences can be quite similar. Ego boundaries are loosened in peak experiences, but don’t dissolve completely as in mystical experiences. Intellectual functions also stay intact to a greater degree, which allows for a higher degree of interaction between subject and guiding therapists than in the traditional psychedelic approach. These peak experiences seem to be the main psychological mechanism of action involved, much more so than the cognitive and psychodynamic experiences that are also frequent as a result of LSD administration.

The Swiss study’s approach certainly has advantages, one of which being that it seems to normalize the results for all participants. In past studies with psychedelics for end-of-life anxiety, conducted during the first era of psychedelic research, the typical outcome would show a dramatic improvement in about one-third of the subjects, a moderate improvement in another third, and no significant changes in the remaining third [3]. In the present study, remarkably, every single patient experienced significant improvement, although none reported ‘dramatic’ effects. This result certainly warrants further study, especially in light of the development of different therapeutic approaches to be used in psychedelic therapy.

Dr. Grob will come all the way from Los Angeles to give a lecture on his research into psilocybin, the active ingredient in ‘magic mushrooms’. The main focus of this lecture will be the investigation into the safety and efficacy of psilocybin as a therapeutic aid in the treatment of severe anxiety in adult patients with advanced-stage cancer. Research into substances such as MDMA and ayahuasca, also investigated at the Harbor-UCLA Medical Center, will be addressed as well. There will be ample time for questions and discussion. Students, health care professionals and therapists are encouraged to attend.

Dr. Charles Grob is professor in Psychiatry & Biobehavioral Sciences at UCLA, Los Angeles (USA). He has published extensively on topics such as substance misuse and the history of hallucinogens in psychiatry. He performed the first FDA approved study of the physiological and psychological effects of MDMA; a multi-national study of ayahuasca in Brazil and has performed a pilot investigation of the safety and efficacy of psilocybin in the treatment of anxiety in adult patients with advanced-stage cancer.
The lecture will take place on Friday 14 June, from 16:00 – 18:00.
LOCATION: CREA (Muziekzaal), Nieuwe Achtergracht 170 Amsterdam.
FEE: €5,- regular / students & alumni get in for free