Xenolinguistics – Psychedelics, Language, and the Evolution of Consciousness 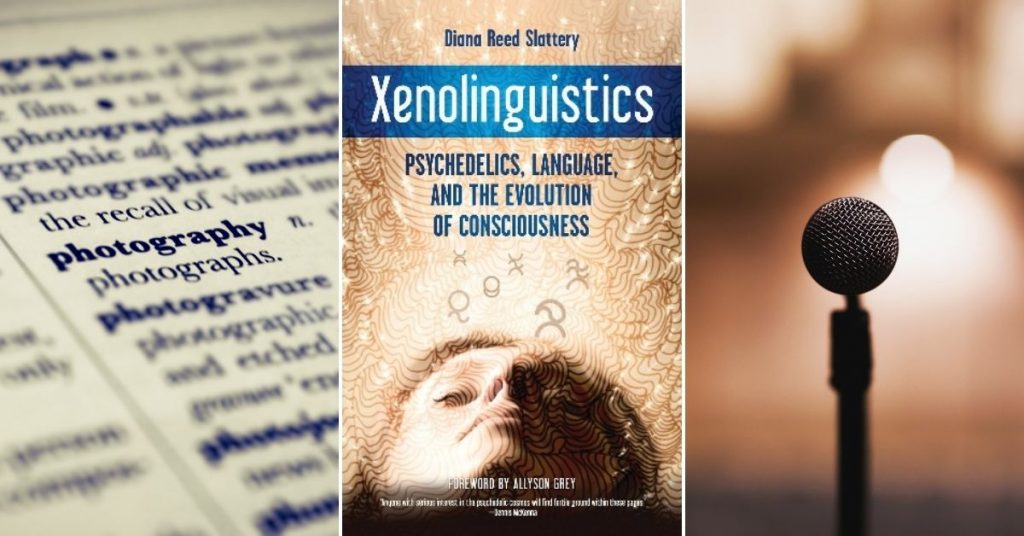 Xenolinguistics – Psychedelics, Language, and the Evolution of Consciousness by Diana Reed Slattery, with a foreword by Allyson Grey. Evolver Editions, 2015.

Psychedelic research always in some way evokes what David Chalmers has called the “hard problem of consciousness”. How does experience arise from physical activity in the brain and, to apply this problem to psychedelics, how does the alteration of the chemistry of the brain alter this experience? Most published research into psychedelics does not address this question directly. Diana Reed Slattery, however, combines both her subjective experiences, those of several other people, with scientific insights from linguistics, biology and psychology. The result is a richly illustrated philosophical work rather than a scientific attempt at proof and explanation. Her work opens up new avenues for further scientific and philosophical inquiries.

The focus of the book is xenolinguistics, which is defined as the study of alien (i.e. strange) languages. Slattery further limits the scope to previously non-existing languages that have been “received” during psychedelic experiences. Although this is a fringe phenomenon even within , understanding it might shed light on other aspects of the psychedelic experience and consciousness in general. Slattery’s aim is twofold. On the one hand she wants to show how psychedelic practices, the use of psychedelics within a certain ritualistic (secular, spiritual or religious) context, can be a “powerful means of gathering knowledge about consciousness”. On the other hand, she examines the results of her own and others’ psychedelic practice in the light of theories of the evolutionfrom a variety of disciplines, with a continuous focus on languages learned during the psychedelic experience.

The book is divided into three parts. The first deals with the practices used for xenolinguistics. The discussion of rituals and the philosophical segments on what can be considered “self” and “other” are among the most interesting of the book, as they pose questions about the way psychedelic experiences are interpreted; is the thing one communicates with the Self, subconscious, Other or even alien? Slattery argues that psychedelic practice hinges upon the setting of a clear intent, controlling the set and setting and the focus that one brings to the experience. Her practice is simple in the sense that no elaborate ritual or belief system accompanies the exp

erience. The idea is to ingest the psychedelic (Slattery mostly uses psilocybin mushrooms, 2C-B, MDMA and cannabis) in solitude, experience and report as fully as possible. She got a “download” of the language she calls Glide quite early on in her practice and continued to explore the details in the years that followed. Glide is an aesthetically pleasing and purely visual language that meanders in all directions. It consists of glyphs, each comprising three rounded strokes. Combining these glyphs results in a ‘Maze’, where glyphs flow into each other. Meaning is multidimensional and reverberates throughout the field of meaning that is created. The result is non-linear and unbounded, much like the psychedelic experience. It is interesting to note that here, the focus on healing that we find in much research on psychedelics is largely absent, in order to focus on knowledge acquisition and creativity. This perspective is very welcome in a field that has become focused on one or just a few aspects of the psychedelic experience, namely the therapeutical applications and the neurobiological effects of psychedelics.

The second part of the book is more theoretical, as Slattery frames xenolinguistics within some scientific theories. This evaluation is far from complete and theories that do not support the possibility of xenolinguistics are not considered. The mere fact that people sometimes receive or develop strange languages under the influence of psychedelics disqualifies any theory that precludes this possibility. In this sense, a more dialectical approach would perhaps have been more beneficial. As it stands, however, it is a collection of fascinating scientific theories that all somehow fit in with the practice of xenolinguistics. Slattery refers to many key actors in psychedelic research; the extensive 16-page bibliography stands witness to this achievement and provides a wealth of information for those who want to dig further into the material. The theoretical ideas are interwoven with notes from her personal journal that support or illustrate the hypotheses about how perception, reality, language and consciousness are, to use one of the beautiful key concepts of the book, intertwingled.

The third part focuses on language, natural and unnatural, constructed and living. Slattery gives examples from a variety of xenolinguists of how meaning is put into language in the psychedelic experience. The role of language in society is also elaborated upon. Strange languages serve many purposes, according to Slattery: they help us express new ideas, new emotions; they enable us to convey these to others or alternatively to keep them private while still being expressed; and they allow us to experience reality in a different way, showing how the creative use of language can alter the way we see the world. Slattery refers to the idea put forth by Richard Doyle that the psychedelic experience is an ecodelic experience, which gives us the opportunity to see ourselves as part of nature and to see how things are interconnected.

Xenolinguistics is a book for those interested in the interplay between psychedelics, language and consciousness. The overall picture that emerges shows that psychedelics can shed light on the way in which language and consciousness interact and co-evolve, by providing us with new languages that stretch our awareness beyond that which we are accustomed to. While the scientific theories in the book are interesting and support the ideas put forth by the author, those looking for pure science will probably be disappointed. The strength of the book lies in its exploration of new ideas and their synthesis into an overarching worldview that invites the reader to think along. The role language plays in our ongoing search for meaning and connection needs further study. This book is an inspiring and inspired attempt to open up this new field.

PrevPreviousIbogan, Tacaman, and Cytotoxic Bisindole Alkaloids from Tabernaemontana. Cononusine, an Iboga Alkaloid with Unusual Incorporation of a Pyrrolidone Moiety
NextMDMA for the treatment of mood disorder: all talk no substance?Next