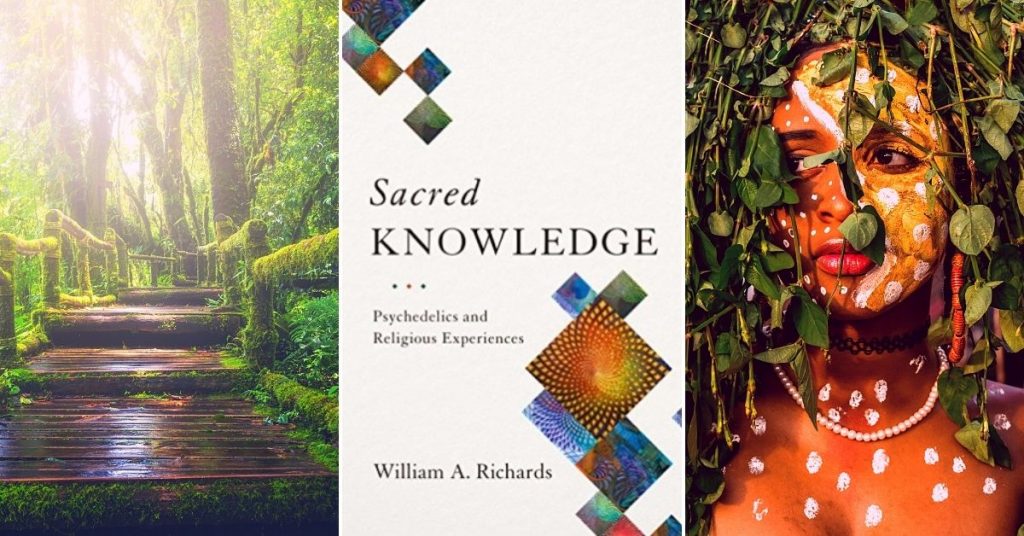 William A. (Bill) Richards is one of the few people alive today that were involved both in the first wave of scientific research into psychedelic substances in the sixties and seventies and in the current era of psychedelics research. It is hard to imagine someone better equipped to discuss the value of religious, spiritual or mystical experiences, occurring spontaneously or occasioned by psychedelic substances, than Richards, who has a formal training in clinical psychology, comparative religion, theology and psychology of religion as well as personal experience with psychedelic and mystical states.

Without explicitly acknowledging it, Sacred Knowledge picks up where William James’ classic The Varieties of Religious Experience left the reader wondering about mystical experiences occasioned by psychedelic substances. With a single unsuccessful attempt with mescaline, and only ephemeral insights provoked by nitrous oxide, James never dedicated a chapter to exogenously engendered mystical states of consciousness. Richards dedicates a whole book to the subject, and eloquently acquaints the reader with the many facets of mystical experiences occasioned by psychedelics. Sacred Knowledge is not just a scholarly work on the overlap between psychedelics and mysticism, but also a personal and professional history of Richards’ relation with these topics.

After providing a historical overview of research with psychedelics and detailing how he himself became immersed in the topic, Richards distinguishes between visionary and mystical states of consciousness, and dedicates a chapter to each of the core features of mystical experiences, such as intuitive knowledge of the divine (regardless of whether one names it God, Allah, Yahweh, Brahman, Celestial Buddha Fields or The Void), feelings of unity, and the ineffability of the experience (although Richards does an impressive job of articulating it).

He addresses several common themes, related by mystics throughout history and across cultures, such as the claim that ultimately, love is at the core of everything and that consciousness is indestructible. Richards manages to address these topics with academic rigour without depreciating the values and content of the experiences described in this book. The author also doesn’t shy away from addressing some of the deep metaphysical, ontological and existential questions that are encountered by many who have experienced mystical states of consciousness. What is the meaning of life? What is God? To address these profound matters, Richards draws just as easily from Ancient Greek philosophers, Biblical references such as Saul’s conversion on the road to Damascus, or Dante’s Divina Commedia as from his personal experiences or the words of dying patients.

The third part focuses on (inter)personal aspects, such as the importance of trust in facilitating beneficial experiences. It also deals with difficult experiences, such as fear, anxiety and despair and how to confront these. Richards reflects upon death and how death is dealt with in Western society, and dedicates a chapter to what is arguably the biggest challenge with profoundly meaningful experiences: how to fully integrate the insights obtained into one’s life. He offers guidelines on how to maximise beneficial experiences and to reduce the potential risks. In part IV, Richards provides an overview of current research as well as avenues for future studies into the potential applications of psychedelic substances in education, medicine, and religion. At the end of the book, he shares some insights collected over the years, as well as an extensive music playlist, used at numerous psychedelic sessions, listened to by hundreds of participants and perfected over decades of research, both wonderful bonuses.

Richards’ extensive experience in dealing with alternative states of consciousness (he prefers this term to altered states), in guiding volunteers, patients and research participants through these states and in trying to understand these profound changes in consciousness, has made him a kind, yet critical, observer. He provides ample proof for his main thesis: i.e. that psychedelics, when given to well-prepared subjects in a trusting, supportive setting, and under the guidance of an experienced and empathic guide, reliably produce tangible benefits.

It is hard to imagine a better advocate for the responsible use of psychedelics to promote spiritual, psychological or educational well-being than Bill Richards. The treasure trove of valuable experiences, expertise, knowledge and understanding Bill Richards has acquired over the decades, and which he shares with us in Sacred Knowledge, makes this a valuable work and a real treat to read. The beautiful, subtle design of this hardcover edition (by no means a trivial aspect) will undoubtedly contribute to the reading experience. Few people could have written Sacred Knowledge and even fewer people could have done it so eloquently. It is highly recommended to anyone who is interested in mystical experiences or the potential uses of psychedelic substances, but should be just as relevant to well-informed academics with an interest in profound, life-changing alternative states of consciousness.

Buy this book at bookdepository.com and support the OPEN Foundation.

Read our interview with Bill Richards.