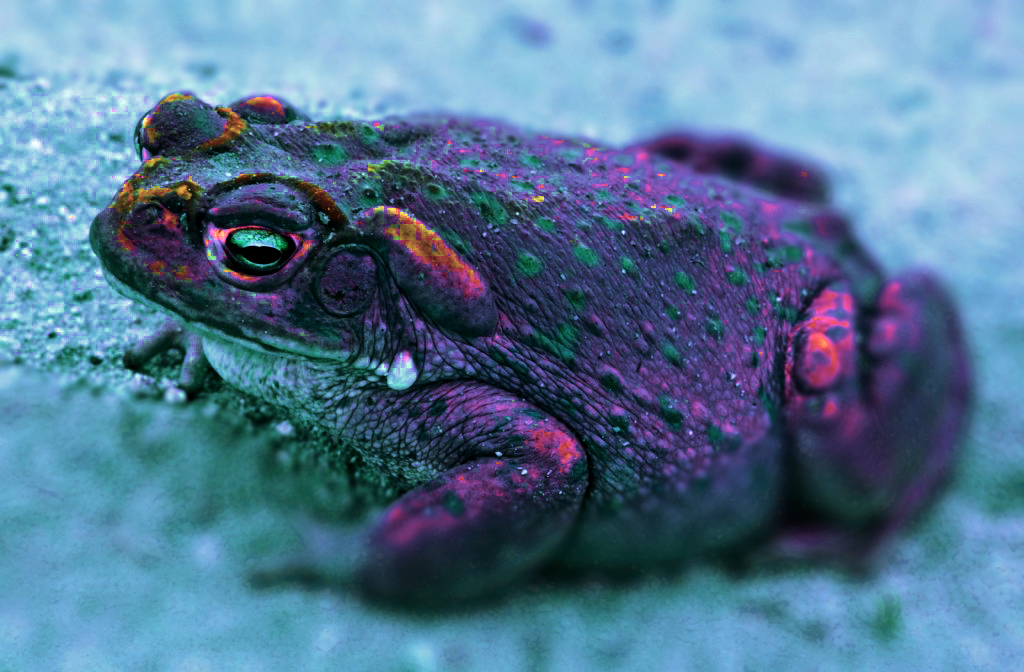 In recent years, there has been an uptick in attention surrounding the substance known as 5-Meo-DMT. It is popularly known as a toad’s psychedelic gift – but is now also being scientifically studied in clinical research. The compound seems ideal as a fast-acting tool for ego-dissolution, with potential therapeutic use. The substance produces stunning effects that no other psychedelic seems to match, and does so within a manageable time frame.

And oh yes: it also happens to be legally available in many locales.

This is why 5-MeO-DMT might be one of the most fascinating – and potentially useful – psychedelics there is. Just like its first cousin DMT, 5-MeO-DMT is a naturally occurring compound. It can be found in both fauna and flora, like seeds, bark, and leaves from a number of plants in the Amazonian rainforest. The Sonoran Desert Toad, official name Incilius alvarius, is its most well-known carrier and has parotid glands that provide the toad’s primary defense system: a poison potent enough to kill a grown dog. This milky secretion also happens to contain 5-MeO-DMT, or 5-Methoxy-N,N-DiMethylTryptamine. If it is collected, dried, and smoked, the toxin produces a powerful, 15-20 minute psychedelic experience that completely differs in its effects from all the other classic psychedelic compounds – including DMT, its closest molecular cousin.

The fact that it hasn’t been scheduled in many countries facilitates research into the substance. Scientists and therapists wanting to work with substances like LSD and psilocybin, which have been put on international drug control lists, need to jump through many hoops in order to get research started.

Maybe that’s part of the reason why scientific research into the useability of this substance has now taken off. In 2019, Maastricht University investigated the effects of 5-MeO-DMT. They found that in a naturalistic setting, a single inhalation resulted in enhanced satisfaction with life and decreased psychopathological symptoms, including depression, anxiety, and stress – all of which were sustained for up to 4 weeks after the experience. ¹

This year (2022), the group, led by Johannes Reckweg, published a review of the current knowledge of 5-MeO-DMT and hypothesized mechanisms underlying its effects. It mapped the workings of the drug, and weighed its potential utility for mental health. It concluded that ongoing research was justified: “The current therapeutic potential of 5-MeO-DMT is mainly hypothetical and based on preliminary evidence. […] Although limited, the studies offer converging evidence of the potential ability of 5-MeO-DMT to provide fast-acting, and potentially immediate, therapeutic relief for depression, anxiety, and stress-related disorders (such as PTSD) in particular.” ²

When a psychedelic molecule finds its way into the 5HT2A receptor binding site, depending on its shape and charge distribution (and thus the interactions formed within the binding site), it will distort the receptor and shift it into a distinct active conformation (ON state). pic.twitter.com/d4t2KQg9yD

Dr. Chris Timmermann has also been investigating the effects of 5-MeO-DMT at the Center for Psychedelic Research, at Imperial College London. He described the gripping psychedelic for us: “What makes 5-MeO-DMT truly unique,” Timmermann says, “is its apparent ability to induce states of ego dissolution in such a reliable fashion. The structure of the experience is fundamentally altered compared to other psychedelics – which usually provide a very rich visual experience. With ‘5-MeO’, users apparently experience a ‘white light’ that is closely associated with the ego-death experience. It is that ego-death experience that appears to have a radical impact on the user, especially in the case of addiction.”

Unlike Ayahuasca, which has a clear indigenous lineage found in the shamanic traditions of amazonian tribes, the cultural heritage of 5-MeO-DMT remains unclear. Although numerous ceramic frog motifs found in the Santarem Territory of the Amazon suggest an indigenous connection to the animal, and some local names could allude to an elevated status of the toad, the evidence is often too ambiguous to make any direct connection to the psychedelic properties of Incilius Alvarius. Maybe future anthropological findings will shine more light into cultures that might have used it in the past. For now, its culture is a more modern tale.

5-MeO-DMT was first synthesized in 1936 by chemists Toshio Hoshino and Kenya Shimodaira but lay dormant as far as use went. Until 1983, when the book Bufo Alvarius: the psychedelic toad of the Sonoran Desert was published by a writer calling himself Albert Most. This latin name was used for the toad until its new classification as Incilius in 2006.

“Bufo Alvarius” is a seminal work describing the toad, its milky defense system and possible 5-MeO-DMT harvesting methods. The book opened the door to the modern culture of smoking the ‘toad venom’, as some tabloids called it and which -by the way- is an inaccurate term. In biology, ‘venom’ would mean the substance is injected by the toad, but it is not: it is sprayed.

That’s not the only confusion around the psychedelic toad. The taxonomy of the toad itself has changed. In 2006, it was classified as a member of the Incilius genus, so the book’s name is now dated. Also, the person laying the foundation for this new culture of toad toxin smoking, ‘Albert Most’, remained an enigma for many years.

The person behind the pseudonym was unknown for three decades, until he was revealed by psychonaut-journalist Hamilton Morris to be a man called Alfred Savinelli – who then was revealed to be an impostor by that same Hamilton Morris! In the third season premiere of his VICE Series Hamilton’s Pharmacopeia, Morris uncovers the lie of Savinelli, and exposes the real author of ‘Bufo Alvarius’ : Ken Nelson.

Nelson turns out to be a reclusive psychedelic researcher, environmentalist and veteran from Texas. To right past wrongs, Nelson and Morris released a new version of Nelson’s pamphlet, featuring Morris’ synthesis of 5-MeO-DMT.

There is still plenty of runway for the substance to create a culture of its own. It was readily available online as a ‘research chemical’ in the United States, and enjoyed limited attention. But its scheduling in the USA in 2011 provided a bolt of attention that increased its popularity. In 2019, the substance was potent enough to knock out former heavyweight boxing champion Mike Tyson, who openly talked about the spiritual awakening that resulted from his use of 5-MeO-DMT.

Soon after, others followed. Media outlets such as Forbes and the New-York Times featured stories about the transformative effects of the substance and included testimonials from ex-Navy SEAL Marcus Capone and his ongoing battle to help other Special Operations veterans access 5-MeO-DMT. All this media attention contributed to the mainstreaming of this compound in the last few years, despite its illegality.

These restrictions have hampered research into 5-MeO-DMT in the countries where it has been forbidden. But in countries like the Netherlands, multiple studies into 5-MeO-DMT are now underway.

As said, there is no indigenous ritual surrounding the use of 5-MeO-DMT, yet treatment centers using the toad’s poison have started to spring up incorporating rituals from other psychedelic cultures. These psychedelic sessions can set you back from $250 up to $8500.

This new popularity has not been good for the Sonoran Desert Toad itself, a risk voiced by Robert Anthony Villa, president of the Tucson herpetological society. Although the toad seems comfortable in human-made constructions like irrigation ditches, suburban yards and near water tanks on ranches – it is now often poached for psychedelic purposes, after which it is stressed out to produce its venom.

A solution for this animal cruelty could be a synthetic variant of the drug which would be preferable over one involving stressing out animals. That’s one of the reasons why Hamilton Morris included the synthesis process for 5-MeO-DMT in one of his episodes. The new edition of Bufo Alvarius: the psychedelic toad of the Sonoran Desert, also features Hamilton Morris’ synthesis of 5-MeO-DMT in a Mexican lab.

When vaporized, a single deep inhalation of 5-MeO-DMT produces strong psychoactive effects within 15 seconds. After inhalation, the user usually experiences a warm sensation, euphoria, and strong visual and auditory hallucinations, due to 5-MeO-DMT’s high affinity for the 5-HT2A serotonin receptor subtype. The duration of these effects are comparable to those of DMT, lasting between 15 and 20 minutes. According to trip reports, at commonly-used doses, 5-MeO-DMT may possess the most complex and overwhelming effects of the classic psychedelic family.

Physical effects can include changes in perceived gravity, pupil dilation, muscle spasms, temperature regulation suppression, and feelings of loss of breath, but also an overwhelming intensity of physical and tactile sensations that can lead to the sensation of repeated, full-body orgasms.

Cognitive effects include distortion of space and time, amnesia, ego dissolution and auditory verbal hallucinations. Visual effects can include visual acuity enhancement, with drifting, color-shifting and morphing of complex geometrical patterns, but more often, reports mention visual suppression, where a blinding white light replaces all the visual complexity usually associated with hallucinogens. Much of this is often preceded by nausea, according to Drug Science UK.

An anonymous OPEN member described his 5-MeO-DMT experience for us as follows: “If LSD is a rollercoaster, 5-MeO-DMT is an intergalactic faster-than-light rocket that takes you to a wholly unrecognizable state of being. Landing back from a high-dose experience you are left with more questions than you came in with, but what an amazing ride it is.”

The combination of all these effects often results in transpersonal effects, during which the sense of identity of the individuals experiencing them extends beyond the personal level to humankind, nature and even the cosmos, which makes for the mystical quality of the experience. As mentioned earlier, 5-MeO-DMT also reliably induces ego dissolution, a phenomenon characterized by a complete change in normal, everyday, self-referential awareness.

So far, very little clinical research has been done on 5-MeO-DMT. The limited number of published studies suggest the compound might be safe and useful in a clinical context. If it turns out that 5-MeO-DMT does indeed have beneficial therapeutic effects, as anecdotal and early scientific evidence suggests, the promising aspects in terms of its practical use in a clinical context would be the duration of its effects.

The Beckley foundation has recently mentioned that MDMA or psilocybin-assisted therapy usually take up an entire working day for the therapist, which “poses a potential bottleneck to patient access in the future,” so a short-acting psychedelic like 5-MeO-DMT would help with both the clinical trial process and subsequent access to psychedelic therapy. As Michael Pollan mentioned in 2018: “a psychedelic therapist wants to be home for dinner too.”

Indeed, 15-20 minutes of medical and psychological supervision is a lot more manageable for clinical trials and therapists compared to the 3-6 hours that are necessary for psilocybin, or the 6-12 hours necessary for LSD. And this could eventually help in making the mystical experience more accessible.

The properties of 5-MeO-DMT lead to fascinating questions about its future potential utility in psychedelic-assisted therapy. But is the psychedelic indeed capable of the same types of transformations that have resulted from LSD, psilocybin and MDMA-assisted therapy? In other words: does the short-acting nature of 5-MeO-DMT come at the cost of its therapeutic benefit?

The answer to those questions is unclear as of yet. The potency of its effects suggests that the short-acting nature of the experience does not impede on its quality, but ongoing clinical trials could shed more light on them.

PrevPreviousHype or hope: how to manage expectations of psychedelic therapy?
NextMichael Bogenschutz has new research on psychedelics and alcohol – AND IS COMING TO ICPRNext