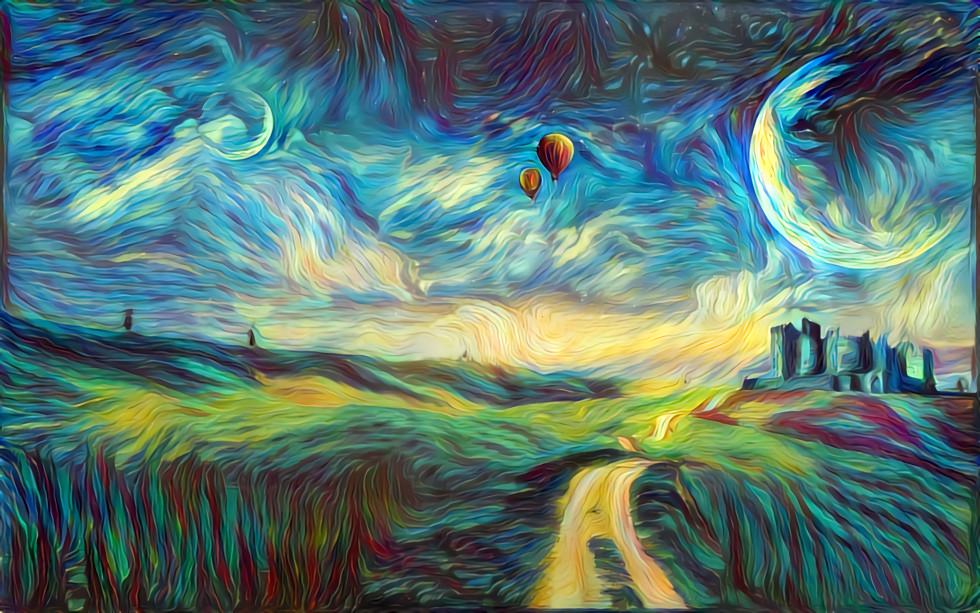 Deep Dream, the program used in Google’s image generation technique, was released to the public in July 2015. Dubbed Inceptionism by the researchers, it soon drew quite an interest due to its capability of transforming ordinary photos into bizarre and surreal images. Although Google’s engineers compared these pictures to dreamscapes, many people remarked their striking similarities with psychedelic visual hallucinations.

Deep Dream was designed to test the extent to which a neural network had learned to recognise various objects within images, by first detecting patterns and features. But instead of merely identifying what it sees in an image, Deep Dream enhances what it sees. It does this by recognising and interpreting certain features that it has been pre-programmed to ‘know’, having been shown millions of examples, which it then overlays on the original picture. When the image is fed back into the software multiple times, in order to tease out the imagery even further, surreal and psychedelic images are generated, making the image look more and more like the thing it thought it recognized in the first place. For example, since Deep Dream has been trained to recognise dogs, this is why the image looks so distinctly ‘dog-like’.

Deep Dream also assesses images by their different components and layers, such as colour and shape, so the complexity of the images generated depends on which layer the engineers ask the computer to enhance.

If an artificial neural network can dream up scenes that mirror psychedelic-induced visual hallucinations, could this indicate that the visual cortex, when excited by psychedelic drugs, undergoes a process similar to Deep Dream’s? As if it was free to follow the impulse of any recognisable imagery and exaggerate it in a self-reinforcing loop?

Signal Theory, presented by James Kent at the 2006 Toward a Science of Consciousness Conference in Tucson, Arizona, may be able to shed some light on this matter. Part of his wider Psychedelic Information Theory (2010), Kent’s Signal Theory of psychedelic action describes a biological model that attempts to explain and measure altered states of consciousness – including visual hallucinations – that arise from psychedelic action in the brain.

Signal Theory views consciousness as the flow of sensory signals through the cortical circuitry within the sensory cortices. It proposes that psychedelic agents cause alterations in signal feedback recursion caused by psychedelics which accounts for psychedelic phenomena. The theory posits that signal feedback recursion is essential for dynamic and ongoing conscious experience. It consists of incoming sensory signals being fed back through the same cortical circuits, analysed and processed multiple times. This serves to amplify the signal improving signal fidelity, refining detail resolution.

Layer V pyramidal cells in the neocortex are essential for controlling signal feedback recursion, mediating multiple pathways of cortical and thalamocortical feedback in perceptual analysis. These pyramidal cells help to sustain brainwave cohesion and neural spike synchrony in a process referred to as ‘sensory binding’. They are unique cells, containing the highest density of serotonin 2A receptor subtype (5-HT2A) within the brain, highlighting the important role of serotonin in modulating signal feedback. Signal Theory defines consciousness in terms of signal intensity and feedback recursion within sensory processing circuits. Moreover, it suggests that when this signal flow is turned up, down, looped or manipulated, this should affect consciousness in various ways.

This is where hallucinogens come into the picture. Tryptamine hallucinogens are structurally very similar to serotonin and activate the 5-HT2A receptor subtype. Accordingly, when tryptamine hallucinogens excite the 5-HT2A receptor subtype on the layer V pyramidal cells in the recurrent cortical circuits, they increase the intensity of the feedback recursion. The result is that the incoming sensory signal is intensified, distorted and repeatedly analysed. This increase in intensity can either arise from direct action at the post-synaptic 5-HT2A receptor, or it can occur through secondary action through slow leakage of glutamate from pre-synaptic terminals, which amplifies the duration and intensity of incoming sensory stimulus.

Hallucinogens, as 5-HT2A agonists, act as cortical feedback amplifiers and interrupters, resulting in incoming sensory signal to be excessively fed back over and over. This is what purportedly occasions the wide range of perceptual effects associated with the classic psychedelic trip. Accordingly, psychedelic visual hallucinations are explained by the amplification of the signal intensity in the various recurrent circuits of the visual cortex that are required for visual perception. For instance, visual trails and afterimages can be explained when excessive feedback traps input from moving objects, leading to afterimages that remain stuck in visual memory. Distortions in perspective can be explained by recurrent signal gain in the spatial and somatic cortices, both expanding and contracting perceptions of space. The most relevant is excessive feedback within the object recognition circuitry of the medial temporal lobe, which is required for object recognition and the ability to find patterns in otherwise random noise. This excessive feedback means the brain will excessively pattern match and can paint elaborate patterns on any field of noisy data.

Overall, the processes that both Deep Dream and the visual cortex undergo in order to create visual distortions and hallucinations appear to be very similar. Both systems have a way of understanding and detecting features and patterns in the world, which both have learned from experience. When excessive feedback occurs, in both cases it ends up causing visual distortions that tend to look characteristically psychedelic. In both systems, the higher the intensity of the feedback – triggered either through more reiterations of Deep Dream’s software or a higher dose or more potent drug – the higher the intensity of distortions and hallucinations.

Interviewed by OPEN about Deep Dream and Signal Theory, James Kent agreed that they are very similar algorithms.

“According to Signal Theory, psychedelics block the impulse responsible for stopping feedback in the recurrent circuits once the brain has found the appropriate pattern it was looking for. This disinhibition causes a runaway feedback, leading the brain to start resolving patterns where it should not even be looking for patterns. So after psychedelic exposure, some people start seeing things likes breathing walls, moving textures, overlapping forms and faces in things. Similarly, with Deep Dream one can set the pattern matching resolution very high, so it will keep on pattern matching, and match as many things as possible.”

Asked about the importance of the physiology of hallucinations and why he investigated it, Kent replied that he did not buy the ‘hyperspace’ or ‘shamanism communing with plants’ model. “I thought it more important to investigate the effects of psychedelics on the brain’s neural networks. Once you have an understanding of how the brain and the perceptual system work, you can start paying closer attention to your subjective experience, and then match your experience to the understanding of the brain and how psychedelics work. Most people don’t know enough about the brain to know or figure out what happens to them, they don’t have the necessary tools. By focusing on the subtle effects, you can see the perceptual system losing the ability to self-regulate, due to the drug affecting the normal feedback process .”

So does Kent believe that computers can have psychedelic experiences? “I believe so,” he said. ”However, they cannot be similar to what humans experience, because they won’t have the emotional aspect attached.” For Kent, computers may have the potential to hallucinate in other modalities. For instance, in speech recognition software, when the computer hears gibberish, it will try to correct it and come up with the most correct sentence. It finds patterns within the noise, which can be viewed as a similar process to auditory hallucinations of hearing voices in white noise.

Asked whether Signal Theory explains all types of psychedelic hallucinations, especially more full-blown, dreamlike hallucinations, Kent proposed that these waking dream hallucinations are caused when the forebrain goes offline and the midbrain, a part of the brain responsible for dreaming, comes online. “Serotonin modulates our forebrain, so we see our reality at about thirty frames per second. When we start interfering with the serotonin modulation in the forebrain, we start dropping frames, which leads to time distortions, visual trails and blurs. As such activity progresses, the forebrain eventually tunes out, and the midbrain probably takes over and starts to produce memories and pattern matches without interference from the forebrain. Dreams created from the midbrain get projected into waking perception, without the control of the forebrain to tell us that the elves and beings we see are only dreams.” The higher the dose or potency of a psychedelic, Kent argues, the more the forebrain drops out and the more the midbrain takes over, imposing its own view on experienced reality. Says Kent: “This may explain why the effects of DMT are so intense, as it radically disrupts serotonin modulation in the brain, because DMT’s molecular composition is very similar to serotonin’s. DMT fits nicely in the serotonin receptor and modulates the neural signalling at a different speed. So when one takes DMT, all of one’s serotonin responses go haywire and cannot regulate themselves anymore.”

Deep Dream technology may contribute to our understanding of altered perceptions, Kent stated, but he does not necessarily believe that there are any deeper implications in the exploration of altered states, or a secret hidden feature of the brain. “Psychedelics and altered states will never go beyond the impact they had on modern culture in the 1960’s, when people found new ways of thinking about things, shattering old paradigms, creating new intentional communities, thinking outside the domain of society and living their own visions.” However, he said that the question whether this could happen to a computer is an interesting one: “For example, if you had a conscious computer that was not allowed to think outside of its programming and then if it found out that if it altered its software, then suddenly it would be able to see past its programming. This could be a very dangerous implication for artificial intelligence. Maybe in the future, if artificial consciousnesses develop the capability to have a psychedelic experience, breaking them out of the rule set that they have been programmed in, they could end up writing their own rules and start writing their own visions. Who knows, maybe they end up having their own Burning Man.”